Hope for a different future on Warsaw’s streets

Every year hundreds of people gather in Warsaw for an alternative commemoration of the Warsaw Ghetto Uprising. This year, a contingent from the Jewish Socialists' Group joined them. David Rosenberg reports. 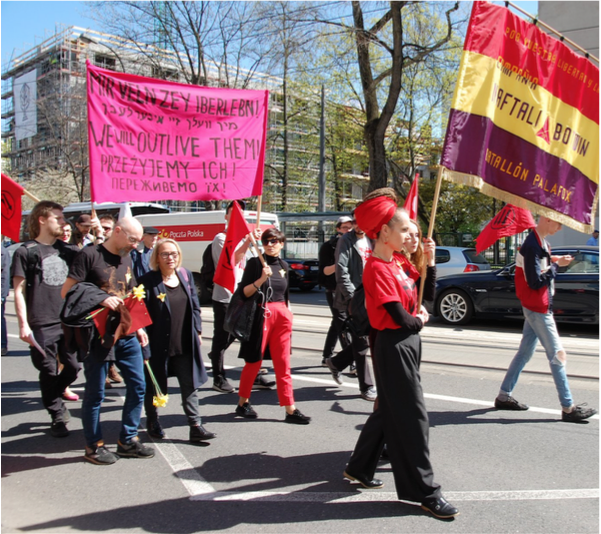 Warsaw 19th April, 2019, 12 noon. Crowds gather either side of the 11 metres high Ghetto Fighters’ monument made of granite that, ironically, was sourced by the Nazis. They intended to build a monument to mark their victory in Warsaw. They never did. Warsaw was a city of resistance. They would have had to build it on rubble in any case. Their only way of suppressing the people of Warsaw, ultimately, was by destroying large sections of it. They ghettoised the Jews who had made up a third of the city’s pre-war population, and deported most of them to the death camp at Treblinka. They put down a remarkable, three-week long guerrilla campaign by hundreds of barely-trained fighters aged from 13-40 years of age. They terrorised Warsaw’s non-Jews, defeating the uprising they led 16 months later. Small numbers of Jews who survived the burning of the ghetto in 1943 were hidden but emerged to fight in the ’44 city uprising.

Sirens blast out for one minute, during which we are united in silence, but the ceremonies on either side of the memorial are remarkably different.

On one side, armed soldiers, uniformed choirs, and the national flags of Poland and Israel, two countries whose current governments are themselves part of a tide of ultra-nationalism that threatens to bring back the dark days of the 1930s.

On our side of the memorial, the hope for a different future manifests itself. A bright pink/purple banner has the slogan “We will outlive them!” in several languages including Yiddish – the mother tongue of Warsaw’s Jews that Hitler’s forces tried to to bury with the Jews. But on this day, nearly 75 years after Hitler died, Yiddish words are again sung on Warsaw’s streets.

Our flags and banners are internationalist and anti-nationalist. Red flags with the symbols of the Jewish Socialist Bund, who fought for better lives for oppressed workers from their inception in 1897, and who, together with other left-wing currents, were the backbone of resistance in Nazi-occupied Poland. Alongside the Bund flags is one with the International Brigade colours celebrating those who left Poland to fight Franco’s fascists in Spain. One side of the banner is in Yiddish – underlining the role played by internationalist Jews in the Naftali Botwin company of the Dombrowski Battalion.

I am there myself as part of a contingent of the Jewish Socialists’ Group (JSG) in Britain acting to express international solidarity and to strengthen our own links to the Bundist past and present. We have spent a study week in Warsaw, choosing this particular week so that on the Friday we could be part of this alternative ceremony.

After a short initial speech from Zuzanna Hertzberg – one of the key organisers – a choir from a Warsaw school that emphasises its multicultural curriculum, sings resistance songs in Yiddish. Few, if any of them, are Jewish but their diction is perfect and their identification with the meaning of what they sing shines through. Some songs are familiar, others new to us. We had spent the previous evening  with  “Warszawianka” – a revolutionary choir who led a workshop with us in the working class district of Praga.

Britain’s Jewish establishment disdain Yiddish in favour of Hebrew, representing Israel’s national culture as “Jewish culture” in the diaspora too. They help to repress the fighting history of the Bund in favour of “heroic” Zionist narratives. But we return to Britain with new Yiddish songs, learned in Poland from the revolutionary choir and the school choir.

In contrast to the strict and militaristic order being maintained by the more static “official” commemoration, ours is free-flowing. When we move, it is like a gently moving wave, which flows outwards then together again along our route to several stopping points. People, young and old, are wearing ordinary clothes. Friends greet each other warmly. Our own improvised JSG placards, made an hour before the ceremony, attract lots of positive attention.

We stop on the corner of the square that holds the Fighters’ Monument, for more songs before we move over to the sculpture of a shattered world to represent the courageous Bundist, Szmul Zygielbojm who committed suicide in London as a political act, having read of the final destruction of the Warsaw Ghetto, and the allies’ failure at the Bermuda Conference to propose drastic rescue action. This monument is particularly poignant for us, as it was our group working together with Bundist survivors, who established a plaque for Zygielbojm in London in the 1990s. Here the cracks in the shattered world are soon crammed with daffodils, the flower resembling the Yellow star in bloom, which Nazis made Jews wear in Germany, and some other lands under Hitler’s regime. The Bundist, Marek Edelman, the last surviving member of the command group that led the Ghetto Uprising, brought daffodils to such ceremonies until he died in 2009

There are poems and readings in Polish. A young choir performs “Es brent” – “It is burning”: a call to arms, written by the Krakowian songwriter, carpenter and socialist, Mordkhe Gebirtig, in the wake of pogroms committed by Poland’s National Radical Camp in  the 1930s. Poland’s ruling Law and Justice party is today working to rehabilitate the reputation of the National Radical Camp of the 1930s. And here by Zygielbojm’s monument the authorities have placed the flags of Poland and Israel. Zygielbojm was as fierce a critic and opponent of Jewish nationalism as he was of Polish nationalism. He would be turning in his grave if he could see them.

From there we move towards the stark monument on a small hill at Mila 18, where most of the exhausted and hungry survivors from nearly three weeks of battles with the most powerful of armies, were trapped in a bunker surrounded by the Nazis. They did not let the Nazis have the pleasure of killing them: they killed themselves, but a group led by Marek Edelman dissented and sought to escape through the sewers. As we walked towards Mila 18 we were found among the crowd by Hania Szmalenberg,  who earlier in the week walked us through the memorials and showed us how she had re-landscaped the original memorial and and added one in English, Polish and Yiddish closer to the road.

Here, the choir sing Zog nisht keynmol as du geyst dem leytstn veg, (Never say you are going down the last road), and powerful poems and readings are performed. The crowd probably some 400 or 500 strong by now winds round into Stawski Street and ends its walk where thousands upon thousands of ghetto Jews of 1942 were forced to assemble – at the deportation point, the Umshlagplatz – whose beautiful memorial was also designed by Hania. More songs and meaningful words fill the air, including a recording of Marek Edelman reading Zygielbojm’s suicide note, before the crowd gradually disperse.