We did what Mosley failed to do – marched with pride along Cable Street! 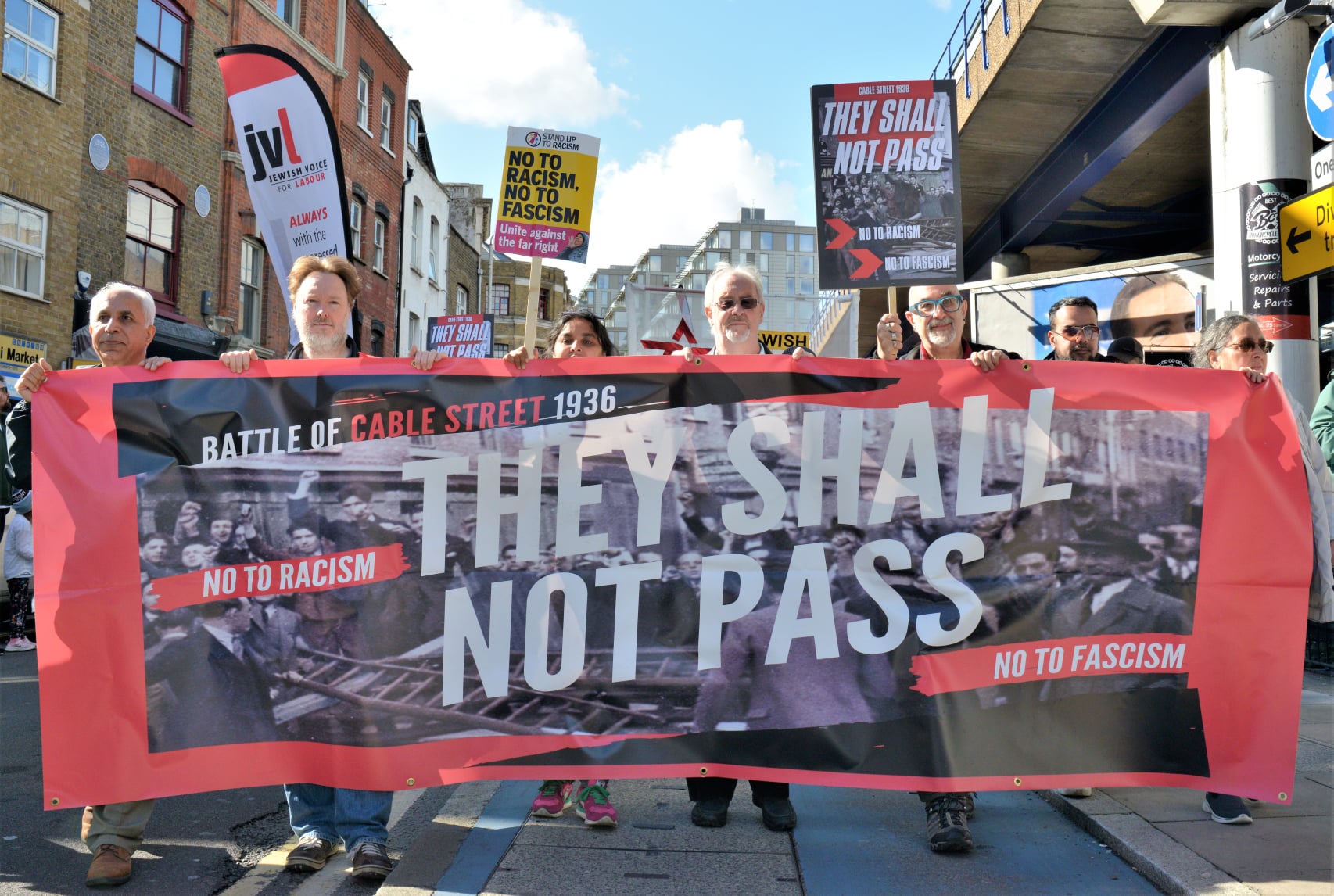 With banners, placards and flags, hundreds of people walked from the boundary of the City of London to the Cable Street mural, and participated in a vibrant rally in St George's Gardens.

This was the first commemoration that could not include veterans of that crucial anti-fascist battle. Only one is still alive, and at 104 was unable to attend. But her daughter, and relatives of other participants on that day, gave moving accounts that have been passed on to them and have influenced their lives. There were inspiring speeches from politicians (Apsana Begum,  the local "MP for the Cable Street mural" and Jeremy Corbyn, MP for Islington North), trade unionists, local Bengali activists and antiracists/antifascists from many other groups and backgrounds. And the sun shone – most of the time!

The rally was chaired by two great antifascist activists, Julie Begum of the Swadhinata Trust and David Rosenberg of the Jewish Socialists' Group (above).

Julia Bard gave this speech on behalf of the JSG

Thank you so much for inviting me to speak today. All of us here have been inspired by what happened on 4th October 1936 – by the determination of those hundreds of thousands of people who had nothing but their bodies and their ability to organise collectively, to block the Blackshirts from invading their area.

But along with that physical courage, what fills me with awe is the insight those working class Jewish East Enders, their supporters, and their counterparts in Leeds, Stockton, Bermondsey and elsewhere, had into how dangerous fascism was.

With hindsight, we can see its genocidal potential; but in the 1930s it was those most directly targeted – working class East End Jews – who best understood the threat. But they were shouting into the void. The British state, which had the power to protect them, refused to stop Mosley’s gangsters marching through. And the official leaders of their own community – the Board of Deputies and the Jewish Chronicle – opposed their decision to stop the fascists physically.

How culpable were the Jewish leaders in telling the East End Jews to pull down the shutters and stay off the streets? I feel angry about the people who lived here being told to cower at home and let the Blackshirts maraud through their area. I feel angry that when the Jewish People’s Council stepped in to organise resistance, they had no backing from those who could and should have advocated for their community.

The Jewish communal leaders in 1936, who were cushioned from the immediate effects of rising fascism, and whose status rested on their amicable relationship with the British state, could close their eyes to the threat, because fascism doesn’t declare its destructive intentions. It creeps in. As Michael Rosen says so powerfully in one of his poems, “Fascism arrives as your friend.”

We have a lot to learn from our forebears. They knew that antisemitism, which was such a danger to Jews, was one plank in an ideology – fascism – which is a danger to everyone. Their ability to organise collectively, to generate solidarity to defend the Jewish population from antisemitism was a crucial battle in a war in which authoritarianism and fear threatened to undermine everyone’s rights and freedoms – and democracy itself.

This has not gone away. Our political system, nationally and internationally, is increasingly authoritarian. Antisemitism, like other forms of racism and bigotry are rising again. But the distortion, misuse and misunderstanding of antisemitism is compromising our ability to recognise and challenge it alongside and in solidarity with other groups fighting racism.

Friends, comrades, we need to take courage and learn the lessons of 1936. Their slogans are still relevant but behind the slogans we need a vision of a future of peace, justice and equality; a vision that inspires us to build strong, vibrant communities together, to support each other, to fight back and refuse to be divided.