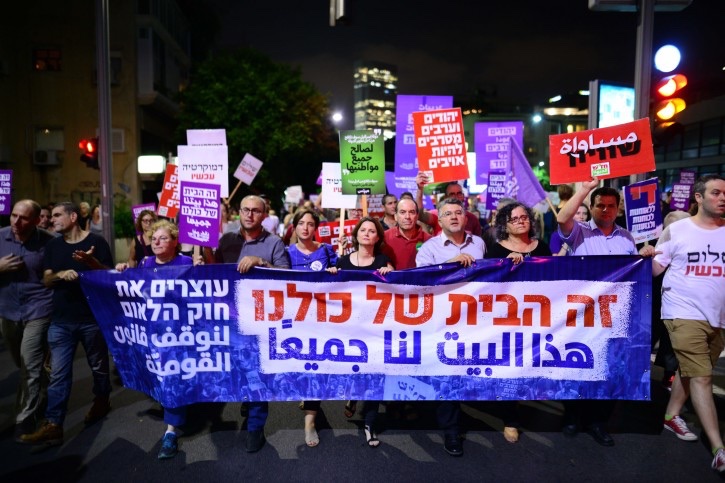 The Jewish Socialists’ Group gives total solidarity to Israelis and Palestinians who took to the streets recently in their thousands to protest against Israel’s new Jewish Nation State Law which was passing through the Knesset. We will continue to support their fight for equality.

Racist and authoritarian tendencies in Israeli society, which impact daily on indigenous Palestinians, African refugees, non-Ashkenazi Jews, and increasingly on human rights organisations, have reached frightening levels. This new piece of legislation is now one of Israel’s “Basic Laws”, which makes it very difficult to repeal

•  enshrines Israel as an apartheid system where the “right to exercise national self-determination is unique to the Jewish people”. Palestinian and other non-Jewish citizens (more than 21% of the population) are excluded from this right.

• downgrades Arabic, which has been an official language in Israel since 1948, spoken and used by Palestinians (and also by Jews from the region).

• declares Jerusalem “complete and united” the capital of Israel.

• describes “Jewish settlement” (illegal land-grabbing) as a “national value” that will be encouraged and consolidated.

Avi Dichter, a sponsor of this law and Chair of the Knesset’s Foreign Affairs and Defence Committee, ended the debate with a chilling threat directed towards Palestinian Knesset members: “We were here before you, and we will be here after you.”

In the light of this law, and in the 100th anniversary year of the birth of Nelson Mandela, we call on Jewish communities and supporters of human rights around the world to acknowledge that the struggle for social justice and equal rights in Israel/Palestine is an anti-apartheid struggle.

Jewish members of the ANC and Jews in many countries played an important role in the struggle against apartheid in South Africa. We call on Jews locally and internationally to reaffirm those same principles by supporting Israelis and Palestinians fighting for a future based on complete equality.

We will challenge bodies within the Jewish community who declare their support for Israel but have nothing critical to say about this new law. How can diaspora Jews fight for equal rights in their own societies while supporting state discrimination against minorities in Israel?

Socialist and progressive movements in Britain and around the world gave crucial support in the struggle against South African apartheid. They must play that role again in opposing Israel’s Jewish Nation State Law. We will not allow solidarity campaigning by the Labour Party and trade unions to be undermined by false and malicious accusations of antisemitism.

This new law was passed during the state visit to Israel of Hungarian Prime Minister Victor Orban, whose own government is one among several very right wing governments in central and eastern Europe promoting Islamophobia, antisemitism and anti-Roma sentiment. The struggle of minorities against racism and for full equality in central and Eastern Europe, and the fight for equality and social justice in Israel/Palestine are part of the same struggle.

We stand by the words of the Bundist (Jewish Socialist) Emanuel Scherer: “Rights and justice for Jews everywhere without wrongs and injustice to other people anywhere.”

Image: Demonstrators protest against the new law. The main banner says: Stop the Nation State Law! This is everyone's home!