Remembering the resistance on both sides of the wall 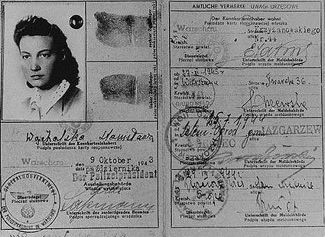 Photo: False identity papers of Bundist Courier Feige Peltel (Vladka Meed) in Warsaw during the time of the ghetto

Today is the 79th anniversary of the incredible uprising in the Warsaw Ghetto: a courageous and inspiring fight for freedom and dignity against all the odds that continues to inspire anti-fascists today in many countries. That fight brought together Bundists (Jewish socialists), left wing Zionists and Communists in a united fighting body under a joint command. But each of those elements also had underground resistance fighters doing vital tasks while hiding on the other side of the wall. We honour them all on this day.

As a group that is particularly proud of the Bundist political tradition, the Jewish Socialists’ Group are remembering today not only those Bundists who fought so bravely within the ghetto, but also those who continued their anti-Nazi resistance work beyond the ghetto walls and in contact with non-Jewish Polish socialists. Couriers such as Vladka Meed (Feige Peltel) and Ala Margolis, obtained and smuggled vital supplies, including arms, passed on news and messages, and helped place and keep track of children smuggled out to hiding places with Polish Catholic families.

We remember Zalman Frydrych who went on a secret mission to find out the destination of the deportation trains in 1942. Jews in the ghetto were told by the Nazis they were being transported for work in the east. With the aid of non-Jewish Polish socialist railway workers, Frydrych found out the truth about the death camp Treblinka, and relayed this information back to Bundists in the ghetto who published the information in underground newspapers.

We remember Mikhal Klepfisz, a Bundist engineer in hiding, who made improvised weapons that he smuggled into the ghetto. He took in his last consignment on his 30th birthday, two days before the Uprising started, knowing that he would not come out. He was killed on the third day of the revolt.

Marek Edelman, a Bundist who was Second in Command in the Uprising, wrote the most powerful and immediate memoir of the events in The Ghetto Fights, published in Polish in 1945, in Yiddish and English in 1946. He concludes with these lines

“The site where the buildings of the ghetto had once stood became a ragged heap of rubble… those who were killed in action had done their duty to the end, to the last drop of blood that soaked into the pavements of the Warsaw ghetto. We, who did not perish, leave it up to you to keep the memory of them alive forever.”