Jewish solidarity with Palestinians on the streets of London 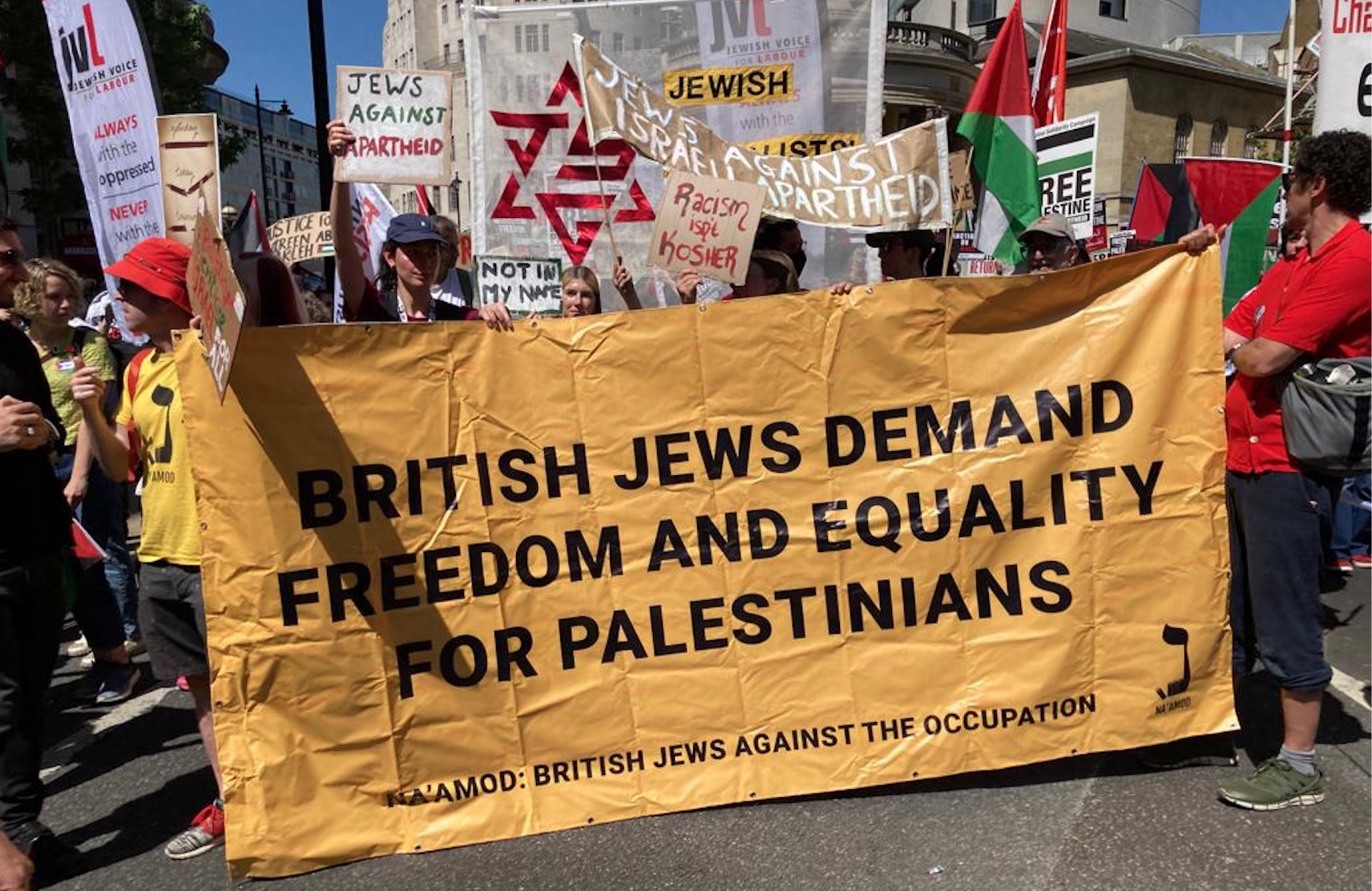 There were banners, flags and placards from Na'amod, Jewish Voice for Labour, Jews for Justice for Palestinians, along with the Jewish Socialists' Group and individuals who joined the Jewish Bloc on today's Palestine protest.

The demonstration as a whole was vibrant and angry, particularly at the shocking violence of the days preceding it, when journalist Shireen Abu Akleh was killed by Israeli soldiers and her funeral was attacked by Israeli police. In addition, two Palestinian teenagers were killed, and the house demolitions continue unabated.

There were speeches from Members of Parliament, activists from many groups and campaigns, and a message of support from former Labour leader Jeremy Corbyn MP, who was in Greece at a meeting of international progressive leaders calling for an end to militarism.

This is the speech made by David Rosenberg on behalf of the Jewish Socialists' Group, which was very enthusiastically received.

Friends, this week we have witnessed the most terrible and murderous actions of oppression in Palestine by Israeli soldiers and settlers.

We have also witnessed a democratic outrage in Germany, in Berlin, where solidarity protests with Palestinians have been banned. Yesterday they also banned a vigil for Shireen Abu Akleh by our close friends in Jüdische Stimme (Jewish Voice for Peace and Justice), and we send them special greetings of solidarity.

The claims that the bans were to prevent antisemitism are a terrible slander against everyone who stands up against racism and for justice and human rights for Palestinians. And they were exposed as a complete lie when the ban also prevented Jews from freely expressing their friendship and solidarity with Palestinians in their just struggle for freedom and self-determination. We, as Jewish socialists, continue to fight all antisemitism and all Islamophobia with the same determination, and to fight for a world free of all racism.

Despite its history, the German state regularly tolerates far-right marches. It is not afraid of antisemitism – it is afraid of solidarity, dialogue and justice. No doubt those who call themselves Jewish community “leaders” will cheer this anti-democratic action. But it is odd that those who shout loudest about “Jewish self-determination” do not like other Jews using their self-determined voice to denounce Israeli racism and apartheid practices.

If Israel doesn’t want to be labelled an apartheid state, it can repeal the Nation State Law and the Law of Return; it can dismantle discrimination, confiscate arms from illegal settlers, make Jewish-only roads available to all. It could end the occupation and bring in laws to ensure that it is a state for all its citizens equally.

We stand in the Jewish socialist tradition, and especially that of the Bund, which opposed Zionism from day one. I will finish with a quote from a Bundist, Emanuel Scherer. He called for “Rights and justice for Jews everywhere without wrongs and injustice to other people anywhere.”