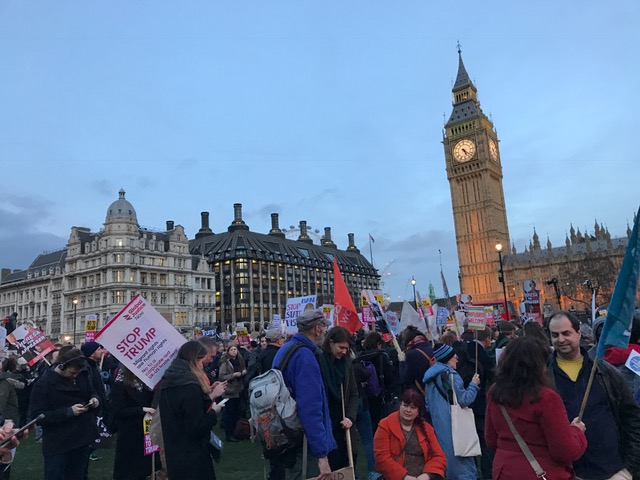 The Jewish Socialists' Group stands with you against the racism, discrimination and destruction being unleashed by Donald Trump, with the collusion of our Prime Minister, Theresa May.

After the Holocaust, Marek Edelman, a Jewish socialist and one of the leaders of the Warsaw Ghetto Resistance, said: “To be a Jew means always being with the oppressed never with the oppressors.”

On Holocaust Memorial Day, Donald Trump refused to mention the Jewish targets of Hitler’s extermination policy. Instead, he ordered a travel ban targeting refugees and Muslims. He thought this would pave the way for a wider attack on vulnerable groups, humanitarians and fighters for justice.

He was wrong. Ordinary people have shown that they will not accept these threats, this violence and this hatred.

We are proud that American Jews responded immediately. Just one example. HIAS set up in 1881 to help Jews fleeing pogroms in Tzarist Russia. Today it works with refugees of all nationalities and religions, across the world, and has joined with other refugee groups to sue Donald Trump for discrimination. HIAS says: “We assist refugees today not because they are Jewish, but because we are Jewish.”

We know our own history

We remember that refugees from the Holocaust were turned away from the United States and Britain, to be rounded up and murdered.

We recognise the antisemitism of Trump and the Far Right appointees around him.

We know that he supports Israel not because he likes Jews but to back Netanyahu’s occupation of Palestine.

We see that he is boosting violent neo-Nazi forces across the world.

We are protesting today, as Jews

• in solidarity with and in defence of Muslims and refugees

• against destruction of the environment

• against the naked greed of corporations at the expense of humanity.

This situation is new and dangerous. We need to build on the wave of protest that’s coming from decent, ordinary people in all their diversity, and to forge a new vision of the kind of world we want to share.

And we won’t give up because we know that protest works!