There was a good group marching with us in the Jewish Bloc on last Saturday's demonstration for the International Day Against Racism. Here is the text of the leaflet we handed out which included our statement on anti-racism and our position on Ukraine. 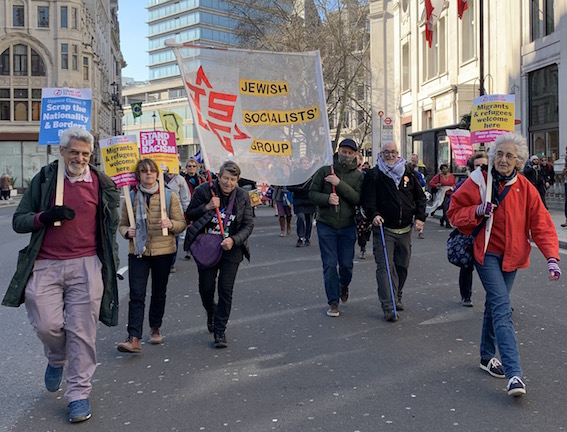 Against racism here and everywhere

The Jewish Socialists’ Group is marching today as part of a Jewish Bloc on this UN International Day Against Racism, against a backdrop of refugees from the world’s latest war zone in Ukraine leaving their homes and loved ones behind as they flee for safety.

Many of our members are descended from Jews who came from Ukraine and other parts of the Pale of Settlement in the Russian Empire to escape violence and discrimination more than century ago, but arrived to face Britain’s earlier hostile environment.

We support all those people who are crossing borders to escape the Russian attacks, and to seek safe haven wherever they can, and we are horrified that the Black refugees among them are facing racism both from other Ukrainians and from Polish border guards.

For months, now, since long before the war in Ukraine, the Polish state has been mistreating mainly Muslim asylum-seekers in the forests on its border with Belarus.

We condemn this denial of their right to asylum – a place of safety.
We honour the courageous Poles who are breaking inhuman laws to save lives there.
We demand that our own government bring home the British troops sent there to support Poland’s violent exclusion of those refugees.

While European governments build, reinforce and police borders, stoking up racism and hostility to migrants, the war has revealed extraordinary generosity and courage among ordinary people – within Ukraine and Russia and in the countries receiving refugees.

This profound sense of common humanity is the foundation on which we can build strong opposition to the vicious inhumanity of the British state. Ten years of the Hostile Environment have destroyed too many lives. We are not taken in by the shoddy publicity stunt that is exploiting people’s goodwill by offering them £350 and telling them to go and find their own refugees, with no back-up, while the government enacts vicious, anti-democratic legislation – the Nationality and Borders Bill and the new Police Bill – that blast away the rights and protections we have fought to establish.

Those rights and protections are universal but the attempt to dismantle them is focused on those already at the sharpest end of discrimination and persecution, particularly Gypsy, Roma, Traveller (GRT) people, and black and brown communities.

At the same time antisemitism in Britain is rising, with a growing number of  incidents perpetrated by individuals from communities that are themselves discriminated against and targeted by racists. We also know that in the Jewish community there are racists/Islamophobes who blame other minorities for their increasing sense of insecurity.

We cannot protect ourselves by turning on each other; we can only fight racism together.

We stand together with the Gypsy, Roma, Traveller community and the black and brown people who are most directly targeted by the Policing Bill.
We refuse to be proxy border guards in our workplaces, policing access to our public services. We urge trade unions to adopt a position of defiance, not compliance.
We challenge racism in all its forms and will not be driven to turn on each other.

Nor does our anti-racism stop at our borders or the borders of Europe. This is the International Day against racism and we oppose our government’s support for the racist, ethno-nationalist regimes in Hungary, Poland, India and Israel. And we challenge those in our own community who think they can pick and choose which forms of racism they are
concerned about and which they can ignore.

Rights and justice for Jews everywhere without wrongs and injustice to other people anywhere
www.jewishsocialist.org.uk

As Jewish socialists, internationalists and anti-imperialists, we honour the words of the Warsaw Ghetto resister Marek Edelman who said:
Always with the oppressed, never with the oppressors!

That is why we unreservedly condemn Putin’s invasion and bombardment of Ukraine, and express our solidarity with Ukraine’s people, who are defending their communities and their self-determination.

We extend that solidarity to the anti-war protesters in Russia who have braved repression by Putin’s authoritarian regime to demand an end to the war on Ukraine and withdrawal of Russian troops. Those protesters in dozens of Russian cities, and the statements put out by many associations within Russia, show that Putin does not speak or act in the name of the Russian people.

Right-wing media commentators and politicians in Britain who talk up war and condemn all things Russian are no friends of ours or of the Russian protesters. They are the very same people who are trying to outlaw democratic rights to protest here.

We support the democratic right to dissent, to criticise and to express democratic opposition to authoritarian rulers and brutal occupiers everywhere, and also to express a view on whether NATO’s expansion contributed in any way to this crisis. We support anti-war protesters in Britain who seek solutions to Russia’s war on Ukraine that will de-escalate tensions and provide a basis for a future of peace, co-existence and human rights for all.

War creates refugees. We demand free entry for all refugees seeking sanctuary in other countries. We condemn the obstructive attitude of Britain’s Tory government that continues to enact its hostile environment towards refugees from this and other military conflicts. We also condemn the racism experienced by black and brown minorities trying to leave Ukraine, whether from Poland’s border control or from fellow Ukrainians, and similar mistreatment of Ukrainian Roma refugees at the borders of Romania, Slovakia and Hungary.

As Jews here, we know that Ukrainian Jews have contributed enormously to global Jewish culture both secular and religious over the past 1,000 years. Despite Cossack-led pogroms and mass slaughter by the Nazis, they still form one of the largest Jewish communities in Eastern Europe. Media attention focuses on prominent and wealthy Jews, especially President Zelensky, but significant numbers of Ukrainian Jews are poor and vulnerable.

As anti-racists, we are also aware of other vulnerable minorities there, such as Roma. Both of our communities have suffered from Ukraine’s home-grown far-right forces. We hope that Ukraine will emerge independent and intact from the war, and that the bulk of Ukrainians will continue the struggle to marginalise far-right forces, whose support has dwindled in recent years but who stand to gain from Putin’s war.