Bringing the Bund to London

Fifteen years ago today we lost a treasured member of the Jewish Socialists’ Group who had a profound influence on the group’s outlook. His name was Majer Bogdanski. He joined the JSG in 1985, a few months after we had invited him to talk to our group. He remained a member until he died 20 years later. David Rosenberg recalls his life, work and influence 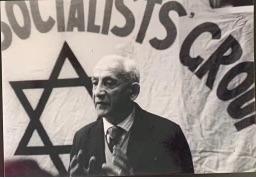 Majer was born in Piotrkow, Poland, in 1912, and by his late teens he had become active as a trade unionist and a Bundist activist. He moved to Lodz in 1935. After the war he lived and  worked as a tailor in the East End.

We first encountered him through the Friends of Yiddish, a secular group of Yiddish enthusiasts who met every Saturday afternoon. He became Chair of the group in 1982 and continued in that role until he became too ill to do so in the early 2000s. Many older members of the Friends of Yiddish, including Majer, were Polish Jewish refugees who came  to Britain after the war. Some were survivors of Nazi camps; others, like Majer, had been interned in labour camps in Soviet Union and later fought within Polish Army units.

The JSG had already arrived at a political philosophy close to Bundism when we invited Majer to speak to a JSG meeting in central London in 1985. It was electrifying for us, mainly Jewish leftists in our 20s and 30s, to hear Majer describe his activism in the Bund in 1930s Poland.

He spoke so powerfully about the fight for work and against poverty; the strikes; the demonstrations against pogroms; street battles alongside non-Jewish Polish socialists against fascist and antisemites; the ideological arguments with Zionists and Stalinists; the struggle to build secular Yiddish institutions such as schools and libraries; the vitality of the cultural and sports organisations; the summer camps for Bundist children and youth which they called socialist children’s republics; and the triumph of the Bund in the municipal elections in major Jewish centres in Poland in 1939, just before the Nazi invasion.

To have a living link with an older political tradition with which we identified so closely was invigorating and validating for us. We recorded the talk and reproduced it in the third issue of our magazine Jewish Socialist.  Majer went on to contribute further articles for the magazine.

He was a guest speaker at a special event put on by the JSG for the Bund’s 90th anniversary in 1987. Through him we met a small network of Bundist survivors in London, and several of them participated in Warsaw Ghetto commemorations. They also formed the core, alongside JSG members, of the Szmul Zygeilbojm Memorial  committee that fought successfully to establish a plaque to a great Polish Jewish socialist and antifascist who committed suicide in London in 1943.

Majer handwrote a new speech every year for our annual Warsaw Ghetto commemorations, but certain themes were always present: his solidarity with Gypsies, who, he would remind us, “were murdered in the same way and for the same reason as the Jews”. And his rage and contempt for those like David Irving, who sought to minimise or deny the Holocaust. To Majer, who had lost his wife, Esther Wolstajn (also a Bundist), almost his entire large extended family, so many close friends, comrades and neighbours, this denial was unbearable. He found out later that Esther, part of the ghetto resistance in Lodz, was tortured but had not betrayed her fellow Bundists, and had perished in Auschwitz.

Majer told us how he had been apprenticed as a tailor when he was 13 years old – the year his mother died. He was the eldest of five siblings. His income as an apprentice was meagre, and his father, a cabinet maker, was worried that Majer might follow the pickpocketing habits of other struggling youngsters. As a moral counter to this, his father sent him to evening classes at a Yeshiva (Jewish religious seminary). He attended for a year. At the end of that year, almost none in the class believed in God; quite a few became communists; some became Zionists; and Majer gravitated to the Bund!

His exposure to Jewish religion, though, had an unexpected by-product. He loved singing and music. After the war he attended adult education classes in music theory and learned to play the violin. He sang beautiful and haunting Yiddish songs at Warsaw Ghetto commemorations. And he remembered many cantorial tunes from his time at the Yeshiva. Many of those melodies were wiped out by the Nazis with those who composed or performed them. Majer transcribed more than 50 of the tunes he remembered, and deposited them with YIVO, the Yiddish Institute in America. Deeply religious tunes salvaged by the most secular of Jews. He also self-published, via the radical/anarchist Freedom Press in Aldgate East, four volumes of melodies he had composed for Yiddish poems he collected.

He remained a political, cultural and community worker until the end of his life, through his local Labour Party branch, as a school governor and through the Jewish Socialists’ Group. He was in his element at JSG cultural events telling stories and singing songs. And the fire of Bundism burned within him until the end. Koved zayn ondenk! Honour his memory!