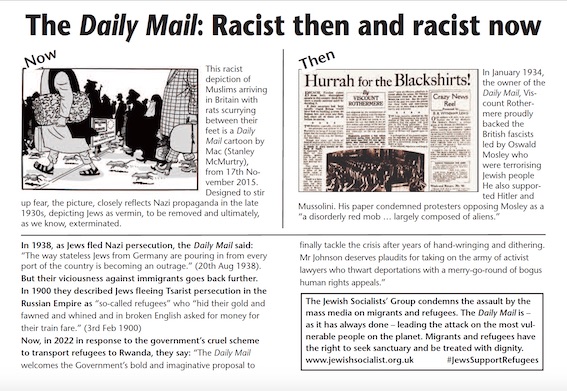 17 June 2022: The Jewish Socialists’ Group made its own contribution to the Week of Action organised through the Solidarity Knows No Borders network, with a protest outside the Daily Mail.

Jewish solidarity with Palestinians on the streets of London

14 May 2022: A lively and diverse Jewish Bloc participated in London's End Apartheid – Free Palestine! demonstration on 14th May 2022

Celebrating struggles for freedom at Passover 2022

Statement on the Rwanda Plan

19 April 2022: Remembering the resistance on both sides of the wall

31 March 2022: Today, it is the funeral of our friend and comrade David Kessel, a Jewish Socialists’ Group member in the East End, and a generous supporter, who died on 8th March 2022 at the age of 74.

22 March 2022: There was a good group marching with us in the Jewish Bloc on last Saturday's demonstration for the International Day Against Racism. Here is the text of the leaflet we handed out which included our statement on anti-racism and our position on Ukraine.

13 March 2022: As the world looks elsewhere, we've gathered some news and other updates from social media on another independent state fighting for recognition and being bombed and brutalised by its heavily militarised neighbour.

Joining the dots in our struggles against racism

The right to remember

28 January 2022: A battle is being waged over who is permitted to tell our history and who owns our memories.

What we were unable to shout out to the world

27 January 2022: Collective action, resistance and the creation of memory, knowledge and hope are the themes of this talk given by David Rosenberg at Stand Up To Racism’s 2022 Holocaust Memorial Day event

The Plagues of today

22 July 2021: The Ten Plagues are part of the Passover story. What are the plagues on society today? Our film outlines them.

21 July 2021: As Euro 2020 so forcefully reminded us - "the beautiful game" is awash with racism. But it isn't just the ugly outpourings of Tory MPs, newspapers and individuals.

17 June 2021: Message of solidarity to the owners of The Pink Peacock café

9 May 2021: The JSG fully supports this statement. We too "stand with Palestinians facing violence and displacement."

We mourn together, we protest together

26 May 2022: Remembering George Floyd, murdered two years ago this week

The event they couldn’t prevent

8 February 2022: A chance to see the Holocaust Memorial Day presentation that went ahead despite attempts to block it

20 December 2021: During the election campaign in Chile, the Diana Arón Jewish Collective made this statement in support of the leftist candidate Gabriel Boric, and against an authoritarian regression

28 November 2021: This is the speech made on behalf of the Jewish Socialists' Group by Dave Landau at the Don’t Let Them Drown – Refugees Welcome Emergency Solidarity Protest in London on 27th November 2021

5 November 2021: Many organisations and individuals have condemned the Israeli government's designation of six Palestinian human rights organisations as "terrorist" The TUC's strong statement is supported by many of the UK's biggest trade unions and the Israeli Committee Against House Demolitions (ICAHD) statement outlines in detail the implications for others supporting the work of the six, and why prominent Israeli government figures have an interest in silencing them.

Remembering Tree of Life - Our solidarity will defeat white nationalism

27 October 2021: Three years since the murderous antisemitic attack at the Tree of Life synagogue in Pittsburgh. Reprinted from Bend the Arc: Jewish Action

4 October 2021: We did what Mosley failed to do – marched with pride along Cable Street!

Support Kosovan Roma in their fight for justice

8 June 2021: International vigils to mark the violence and ethnic cleansing perpetrated against the Roma population of Kosovo to be held on 13th June 2021

Without justice there can be no peace

20 May 2021: Statement by the Jewish Socialists’ Group

17 May 2021: The Jewish Bloc at the Free Palestine demonstration

End the pogrom in Jerusalem

2 April 2021: On 5th April the Israeli Supreme Court will decide the case for the forcible eviction of the 18-member Palestinian Sumarin family from their home in Silwan, East Jerusalem, located directly below the Old City.

18 March 2021: Jewish Socialists stand by our Romani and Traveller Sisters and brothers against persecution

8 March 2021: Celebrating all the inspirational, ordinary and extraordinary women

12 February 2021: The verdict against two Holocaust historians in a libel trial has chimed with sinister actions by the Polish state, which are encouraging more open expressions of antisemitism. David Rosenberg reports

26 January 2021: Sage – one of the many private care homes across the country – runs a Jewish Care home in Golders Green. Covid-19 has placed intolerable burdens on staff as they deal with the suffering and deaths of residents who had become friends and unable to call on the support of the residents’ families.

26 January 2021: The Jewish Socialists’ Group was very pleased to be represented at “Never Again” the Holocaust Memorial Day online event, hosted by Stand Up To Racism

21 January 2021: A full programme of events across the world to celebrate a people with no borders

A Celebration of Jewish Radicalism

30 December 2020: A chance to catch up with this wonderful evening of ideas, discussion, exploration and culture held in mid-December. Click on the link at the end of the article to watch the recording.

Antisemitism, the EHRC and Jeremy Corbyn

31 July 2020: Sunday 2nd August is Roma Holocaust Day and there will be a Holocaust Commemoration organised by United Roma Network at 12 noon at Parliament Square followed by a march to Europe House. Our speaker, David Landau, cannot travel safely to the commemoration on public transport due to the coronavirus risk, but his speech will be read out and we hope other JSG members and friends will be able to get there safely to convey our solidarity.

No compromise with occupation and annexation

To freedom, to health, to solidarity!

9 April 2020: A Passover message from the Jewish Socialists’ Group

30 December 2019: The pavement in Hampstead was crammed with people who gathered in solidarity with the targets of a spate of antisemitic graffiti

Jews for a Labour victory

Jewish antiracists speak out against the new PM

Jewish Socialist No 72 on sale!

22 July 2019: The new issue of the magazine is back from the printers and is selling fast

Speak out against Trump

From London to Warsaw

13 April 2019: Jewish Socialists head to Poland to unite with anti-fascists

Jewish Bloc on National Demo: United Against Racism and Fascism

United in memory of the Holocaust

25 January 2019: Statement by Jewish Voice for Labour and the Jewish Socialists' Group

7 November 2018: On this anniversary of the terrifying 1938 attack on Jews across Nazi Germany, fascism is on the march again and we need to find new and powerful ways to resist, starting on 17th November

28 October 2018: Jewish Socialists’ Group statement on the attack against the Tree of Life synagogue on Saturday 27th October 2018, when the congregation had gathered for the weekly service.

We must define antisemitism to fight it effectively

16 June 2018: The Jewish Socialists' Group is pleased to be one of the four Jewish organisations that endorsed this letter, signed by many prominent academics and others, which was published in The Guardian on 15th June 2018

Jewish Socialists back call for Inquiry into Tory Islamophobia

Oppose antisemitism and malicious accusations by supporters of the Tory Party

How Salonika became disfigured by antisemitism

27 January 2018: Kevin Ovenden charts how the birthplace of the Greek working-class and socialist movement has come to be riven by the far right and rabid nationalist forces.

Remembering the horrors of Auschwitz

27 January 2018: On Holocaust Memorial Day, David Rosenberg looks back on his recent visit to the most notorious of the Nazi death camps and reflects on the collision of the past and an increasingly racist present

20 October 2017: This weekend marks the anniversary of the formation of the Bund – largest and most significant Jewish socialist movement that has existed.

4 October 2017: Dr Moshe Machover – a lifelong Israeli socialist, anti-racist and anti-imperialist, who has lived in Britain since 1968 – has been expelled from the Labour Party.

30 July 2017: Statement by the JSG on the uses and abuses of the International Holocaust Remembrance Alliance “definition” of antisemitism

Jewish Bloc – Not One Day More

29 June 2017: The Jewish Socialists' Group and jewdas are organising a Jewish Bloc to march together on 1st July on the national demonstration in London to get rid of this vicious Conservative government.

For social justice. For a Labour government on 8th June

1 June 2017: The Jewish Socialists’ Group is urging all its members and supporters to campaign in every way they can for a victory for the Labour Party on 8th June under Jeremy Corbyn’s leadership.

28 March 2017: Two days after the atrocity in Westminster on 22nd March 2017, in which four people were killed and many more injured, David Rosenberg sent a message on behalf of the JSG to be read out at a Unity Vigil at Downing Street, organised by Stand Up To Racism

22 February 2017: Speech given by Julia Bard of the Jewish Socialists' Group at the Stop Trump rally 20/2/17 at Parliament Square

5 February 2017: The Jewish Socialists' Group marched in a Jewish bloc on the protest against Trump's anti-Muslim travel ban on 4th February 2017. Here is the text of the leaflet we handed out.

Stand with the majority and end the Occupation

4 February 2017: A week after Holocaust Memorial Day (when Donald Trump failed to mention the Jewish victims), and in the expectation of an imminent visit from Netanyahu to Britain, hundreds of Jewish people speak for the majority of Jews in signing an advert opposing the Occupation of Palestine.

23 January 2017: Please sign up to show your support for the UN Security Council Resolution 2334 against Israeli settlements

18 January 2017: The Jewish Socialists' Group has joined other Jewish organisations that work for justice for Palestine in endorsing the following statement.

A call for unity in action against Netanyahu and Trump

4 January 2017: A statement to progressive Jewish groups locally and internationally from the Jewish Socialists’ Group in Britain

12 November 2016: A statement from the Jewish Socialists’ Group

Statement on parliamentary report on antisemitism

10 June 2016: The Jewish Socialists' Group has submitted this document to the Inquiry set up by Jeremy Corbyn in response to the accusations that the Labour Party is a hotbed of antisemitism. As an organisation with decades of experience of fighting racism and antisemitism alongside other minority communities, we believe we are well placed to add clarity and make recommendations to the Inquiry and wish them luck in reaching constructive outcomes.

Statement on “Labour’s problem with antisemitism”

30 June 2015: Israeli forces have once again seized a boat and crew with civilian aid for the people of Gaza. Among those they have taken is Dror Feiler, chair of European Jews for Just Peace (EJJP). The Jewish Socialists' Group in Britain is affiliated to EJJP, and has endorsed this statement.

4 June 2015: a report on recent Conway Hall meeting paying tribute to Mike Marqusee, who died at beginning of this year.

Britain’s minorities must not be divided

2 February 2015: Statement by the Jewish Socialists' Group on Britain First, the Jewish community and anti-Muslim racism

Aussie Jewish site asks do you know what JNF does with your money?

JSG Resolution on Peace and Freedom in the Middle East