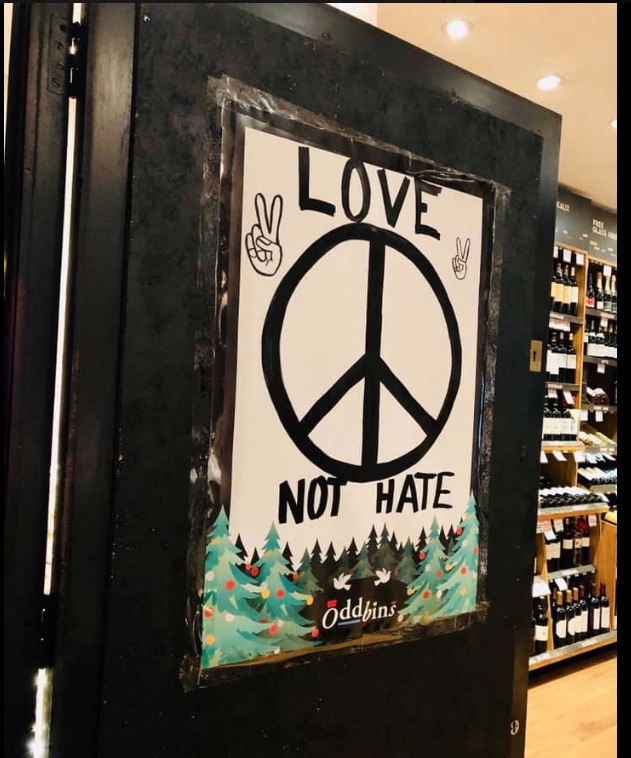 Photo: A shop that was daubed replaced the graffiti with a message of love

Several shops and South Hampstead synagogue were daubed with antisemitic graffiti over the last weekend of 2019, coinciding with the last days of Hanukkah. A vigil organised within 24 hours by a few anti-racist activists under the umbrella of Stand Up to Racism attracted people from the locality and across London to demonstrate their determination to challenge the rising incidence of threats and bigotry. The speakers came from a wide range of backgrounds, Jewish and non-Jewish, religious and secular, all determined to find common ground and forge a united response. Julia Bard spoke on behalf of the Jewish Socialists' Group. This is her speech.

"The Jewish Socialists’ condemns the cowardly spraying of antisemitic graffiti on South Hampstead synagogue and shops in Hampstead and Belsize Park on the last day of Hanukkah, the Jewish festival which celebrates enlightenment and a successful struggle to sustain a culture under attack from imperialist forces that were trying to obliterate it. These daubings have closely followed the spate of incidents in New York culminating in the vicious attack on Hassidim who were celebrating Hanukkah at the house of a rabbi over the weekend.

"My parents lived down the hill from here, and were members of South Hampstead Synagogue. So this feels frighteningly close to home for me.

"In 2019 we’ve seen antisemitic attacks by the far right in Germany, Hungary, Poland and the Czech Republic as well as in America. There were horrific terror attacks at synagogues in Halle, Germany, and San Diego, USA. We also had the attack and daubings by dozens of far right uniformed Hungarian nationalists on the Aurora Jewish community centre in Budapest, and a graffiti attack on a remnant of the Krakow Ghetto wall over the Jewish New Year, saying "Whores Jews, get the fuck out of Poland".

"In this country, every racist, fascist, and conspiracy theorist will have felt emboldened by the re-election of Boris Johnson’s hard right Tory government – a government whose Ministers deliberately and unapologetically use humiliating and threatening racist terms; a government which has perpetrated the murderous Hostile Environment; a government that has instantly excised the Dubs Amendment, removing even the minimal commitment they had to rescuing child refugees.

"Boris Johnson has found time to tweet from Mustique about Brexit but has had nothing to say about this attack in north London. His government will be judged not only on its response to this incident but to how it responds to recent applications by racists and fascists to join the Tories, and what further action they take against Tory election candidates suspended over antisemitism.

"In contrast, Jeremy Corbyn has said: “How terrible that Chanukah started with a message of hope and on this last day we face antisemitic graffiti in London and horrific stabbings at a party in New York. We stand with all our communities facing hate. We send love and solidarity to Jewish communities around the world.”

"We in the Jewish community appreciate his support very much just as all the other minority communities under attack value his very real concern, because this year has brought terrible and consistent attacks on other minorities too, and particularly on Muslims and Roma and Sinti Gypsies and Travellers, who are also in the cross-hairs of this government.

"We cannot fight this on our own. Our strongest defence – our only defence – will be through minority communities and all anti-racists and anti-fascists giving practical support and solidarity to each other.

"Thank you everyone for coming and for your support."