Jews for a Labour victory

Statement by Jewish Socialists on the coming UK General Election 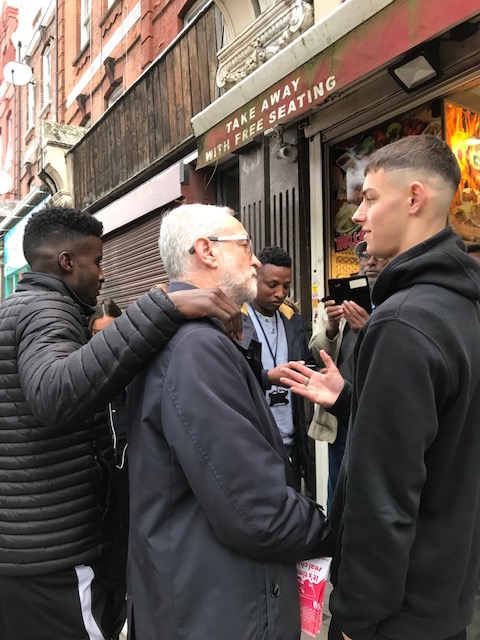 We live in dangerous times. In the USA and many countries in Europe, populist right wing governments and movements, preaching ultra nationalism, racism and other bigotry, have consolidated power or are gaining more support. There have also been shocking terror attacks in the last two years on Jewish and Muslim targets in the USA, Europe and New Zealand perpetrated by individuals who are inspired by neo-Nazi ideology.

When Donald Trump stood for the US presidency on a Republican ticket in 2016, some 70% of American Jews voted against him. Mainstream Jewish bodies in Poland and Hungary have strongly criticised antisemitic tendencies in their governments.

Here in Britain, all Jews are rightly concerned that antisemitic incidents have been rising year on year over the last decade. That has happened under a Tory government which maintains close relations with the governments of the US, Poland and Hungary, and has itself openly declared a Hostile Environment against migrants and refugees, the policy that spawned the Windrush Scandal.

Uniquely, though, in the British case the governing party has managed to deflect responsibility for rising antisemitism on to the opposition – the Labour Party. Since Jeremy Corbyn became Labour leader in 2015, pro-Tory newspapers and Jewish leadership organisations have made repeated allegations of antisemitism against Labour members, or those believed to be Labour members. Despite his longstanding record of outspoken opposition to racism, Corbyn himself has been branded an antisemite, and these allegations against him have been conflated with his outspoken support for Palestinian rights. Jews who question this narrative and who are critical of Israeli government policies have themselves been accused of colluding with antisemitism.

Antisemitism exists in all classes of the population and it is likely that there are pockets of antisemitism in all political parties. The most reliable survey information suggests it is far more common on the right rather than on the left of the political spectrum, where it sits comfortably alongside Islamophobia and anti-refugee sentiment.

While it is true that there have been some proven incidents of antisemitism among a small number of individual Labour members, these members have been subject to a disciplinary process resulting in sanctions, including expulsions. But it is also true that many allegations have been found to be without substance, or to relate to actions that were perpetrated by people who were not Labour members.

Many members of the Jewish Socialists’ Group also belong to the Labour Party, and have participated in anti-racist and anti-fascist initiatives with fellow party members.

We can see no evidence that a victorious Labour government would persecute, disadvantage, hurt, oppress or delegitimise Jewish citizens. On the contrary, the party’s commitment to equality and to challenging racism and discrimination, are key to its values and manifesto commitments. As are its commitments to benefit the majority of the population, especially the working poor, disabled people, those who are homeless, unemployed or young, as well as disadvantaged ethnic minority groups and refugees.

The manner in which Jewish establishment bodies and the most prominent Jewish newspapers talk about the political needs of Jewish people in Britain seems to treat us as a community apart and even accept some stereotypical portrayals of Jews as a homogeneous and wealthy group. It is as if Jewish people have not shared any of the hardships of the last 10 years of Tory austerity, aided and abetted between 2010 and 2015 by the Liberal Democrats.

Unemployed Jews, struggling Jewish single parents and pensioners, young Jews facing spiralling tuition fees for higher education, Jewish users of the NHS and mental health services that have been cut to the bone, all need a radical reforming Labour government to help and support them, in the same way as their counterparts in other communities.

The many Jews who work in the fields of health, education, social care and other public services know that they, along with their non-Jewish colleagues, will benefit from Labour policies that support these services and defend them from cuts and privatisation.

We call on Jewish people in Britain to be vigilant and to act against all antisemitism. We also ask them to recognise that the source of most antisemitism, along with other forms of racism, is coming from a resurgent nationalist right wing that is firmly embedded in today’s Conservative Party.

We call on Jews in Britain to vote for a better, more just and equal future for everyone, and especially for those suffering poverty and discrimination.

Photo: Julia Bard
Respectful discussion about antisemitism is possible and necessary – Jeremy Corbyn talking to young people on the streets of his constituency, 8th November 2019.