What we were unable to shout out to the world

Collective action, resistance and the creation of memory, knowledge and hope are the themes of this talk given by David Rosenberg at Stand Up To Racism’s 2022 Holocaust Memorial Day event 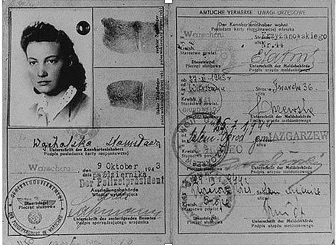 I am honoured to join this platform. Holocaust Memorial events enable us to acknowledge and remember who and what was lost to the world, and learn from individuals’  personal experience.

The Nazis’ final solution attempted not only to wipe out a people, but erase a culture and civilisation – Yiddish culture. But I am proud to use the Yiddish words of anti-Nazi resisters: “Mir veln zey iberleben” – We will outlive them; and “Mir zaynen do” – We are here!

Nazism was defeated in 1945, but the authoritarian, ethno-nationalist ideas that fuelled it, are still aimed against targets in different countries. Our responsibility is to expose them and build an inclusive, united resistance to those ideas today, drawing inspiration from those who fought fascism before us.

The Holocaust happened in the real world, within a capitalist system that reduced human beings to enslaved, disposable units of production, creating profits for companies that developed and packaged and installed poison gas. This economic system channeled the skills of trained architects, engineers, scientists, physicians, administrators… to create factories of death that deprived the world of the talents and potential of millions of other human beings whom they labelled as inferior.

That’s my analytical framework, but my focus tonight is on resistance, and creators of memory, knowledge and hope through collective action.

In 1987, I attended a conference in New York of around 50 participants, marking the 90th anniversary of the Jewish Socialist Bund which, together with Polish Socialist Party leftists, led the physical and ideological struggles against Poland's far right forces of the 1930s. I met survivors who had been Ghetto resisters and Partisans in the forests. In one session we heard from Wladka Meed, a quietly spoken woman, whose mother, brother and sister were among more than 900,000 Jews and 2,000 Romani Gypsies murdered at Treblinka – a number exceeded only by Auschwitz, whose liberation we mark this week.

Wladka joined the Bund’s youth movement in Warsaw at 14 years old. In her early 20s she was part of a network, mainly women, collectively known as “couriers”, who lived beyond the Ghetto with false papers. They travelled around Poland under the Nazis’ noses, smuggling themselves in and out of ghettos, delivering forged identity cards, messages, underground newspapers, and later, guns, grenades and other weapons. The resistance fighter Marek Edelman remarked that, most importantly, she delivered hope to those walled off from the world.

I have a 90-year-old friend in London who owes her life to Polish Catholic families who hid her after she and her twin sister were smuggled out of the Warsaw Ghetto. But she owes her life also to Wladka, who visited regularly and made payments to those hiding her.

The Jewish Historical Institute in Warsaw, today, has a permanent exhibition celebrating Emanuel Ringelblum who co-led a network of mutual aid societies organising underground soup kitchens and secret educational and cultural initiatives with drama and poetry programmes. But above all this exhibition highlights an underground research project he founded calling itself Oyneg Shabbes – “Society for the pleasure of the Sabbath”. Its 12 co-workers documented and archived what was happening in the Warsaw Ghetto under Nazi occupation. They had contact with around 60 others who, to protect the secrecy of the operation, knew few of the others. They distributed and collected questionnaires and notebooks to ordinary people.

When mass deportations began in July 1942, they recorded the destruction of the people and sent that information out of Poland through clandestine routes.

Its archived materials were buried in metal boxes and milk churns. History, they say, is written by victors, but here it was described by victims on the eve of their destruction. Researchers are still making new insights based on those archives.

The first cache was unearthed in 1946, the second in 1950. Rokhl Oyerbach, was one of the few members of the project who survived. She said there was a third cache that has not been found.

One of the people who buried the archive, 19-year-old Dovid Graber, was killed soon after in Treblinka, but his message survived with the material. It said: “What we were unable to shout out to the world we hid underground. May this treasure end up in good hands, may it live to see better times. May it alert the world.”

The most significant physical resistance by Jews during the Holocaust took place over 3-4 weeks in the Warsaw Ghetto, but less prolonged acts of collective rebellion, inspired by Warsaw’s example and informed by messages from couriers, took place in many ghettos, labour camps, concentration camps, even death camps.

The April 1943 uprising in Warsaw built on an earlier act of rebellion whose anniversary just passed. In January ‘43, the Nazis tried to resume their mass deportation programme from the Ghetto, but were assailed by gunfire from four different barricaded positions organised by a united fighting body comprising Bundists, Communists and left-wing Zionists. That body’s ammunition was boosted by a small donation of 10 pistols from the Polish Home Army. The Nazis cut short their action. A few days later the Polish Home Army smuggled in 50 pistols and 55 hand grenades to the fighters, which were used in the April uprising.

I want to finish with one more example of mutual aid in 1943, and a comment on solidarity actions in Poland today. A Bund activist, Bernard Goldstein, describes the Ghetto population and the fighters' organisation making collective preparations for their final struggle:

“We concentrated on the building of bunkers … hiding places for men and supplies. … Groups of inhabitants in a tenement or in neighbouring tenements organised, collected money, and hired engineers and technicians to supervise the building.

“The bunker took various forms… Sometimes it was a double wall, parallel to the old one, with enough room between the two for several people to wait out a raid. Access … might be through an old wardrobe … its side might be lifted … to allow one person at a time to crawl into the corridor between the walls. …sometimes the bunker was a double cellar, constructed by digging a tunnel under the old cellar and hollowing out a large cavern at the end of it … in some of the double cellars crude ventilation systems were installed as well as connections for electricity and water … tunnels were dug to connect one courtyard to another. Passages were connected through the cellars and the attics – a communications system which proved to be of great strategic value during the ghetto uprising.

Contrast that co-operation with the Nazi system of utilising people’s education and skills to build death factories.

Anti-racists in Poland today are challenging not only fascist groups but also racist state forces who have built a militarised zone on the Poland-Belarus border to keep out mainly black and brown asylum seekers. Fourteen Polish NGOs have united within Grupa Granica – to help and support asylum seekers who get through. It was heartening to read an activist explaining that they campaign today because they knew their grandparents had secretly helped Jews in the 1940s.

In 1948 Wladka Meed wrote a book in Yiddish, translated into English in 1972, called On Both sides of the Wall. It’s a harrowing account of resisters and collaborators, courage and betrayal – and many who were simply bystanders, who witnessed terrible injustices but did not intervene. Our job, as anti-racists and anti-fascists is to turn bystanders into upstanders.