Jewish Socialists’ Group statement on the attack against the Tree of Life synagogue on Saturday 27th October 2018, when the congregation had gathered for the weekly service. 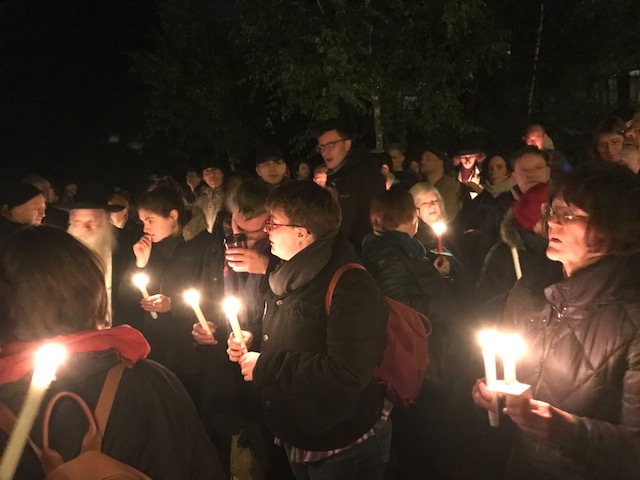 The Jewish Socialists’ Group sends solidarity, condolences and love to the Jewish community in Pittsburgh following the racist atrocity carried out against the congregation of the Tree of Life synagogue.

The perpetrator, Robert Bowers, is a Nazi sympathiser, an extreme nationalist, and a conspiracy theorist, who believes that the Jews are bringing in “invaders”, by which he means refugees, such as the thousands of desperate Honduran people travelling through Mexico to seek a safe future in the United States. We know this because he has openly posted his hate-filled views on social media, starting with: “jews are the children of satan”.

As he walked into the synagogue building, he shouted: “All Jews must die!” He targeted these people simply because they are Jews; and he chose these particular Jews because the Tree of Life congregation are local partners of HIAS, the Hebrew Immigrant Aid Society, which works to resettle refugees.

This shocking attack, said to be the worst hate crime in Pittsburgh’s history, is part of a growing pattern of racist violence across the States, ranging from pipe bombs sent to Trump’s political opponents to two black people being gunned down in a Kentucky supermarket by a man shouting “Whites don’t kill whites!”

The most extreme fascistic and white supremacist ideas and movements were marginalised in the USA by the success of the Civil Rights movement, but a powerful strand of racism has continued to be part of the fabric of American life. Now, though, Trump’s vicious hostility to all America’s minorities, including people of colour, Muslims, Jews, indigenous peoples and Hispanics, has lifted the lid on this suppurating bitterness and hostility, which has never been effectively addressed or challenged. Now, the hate-filled racist policies, actions, speeches and tweets coming from Trump and the people around him have given permission to racists and fascists to declare and act on their inhuman beliefs.

This is not unique to the United States. In Britain, racists and fascists are expressing their hatred more openly and claiming a right to take over our streets, promote a violently divisive “explanation” for the hardships so many people are suffering, and make minority communities feel unsafe as they go about their lives. We know that far right movements are making frightening gains right across Europe and we need to stop this process now. The only way we can do that is together.

All the minority communities being targeted urgently need to work with each other and in mutual solidarity to get these people off our streets, out of our media, out of the institutions that run our society, and out of government. Not just here in Britain. The growing far right is an international phenomenon, and we have to recognise that and challenge it with our antifascist allies across the world. Nor is it just minorities that are in the frame. Fascism threatens the future of everyone who wants and needs to live in a civilised, democratic, humane society, and we need to find common ground, resolve our differences and fight this together, urgently.

When someone dies, Jews say: "May their memory be for a blessing." It is our obligation now, in their memory, to end the hatred that generates such carnage and destruction.

Photo: Vigil for the victims of the Pittsburgh synagogue shooting, at the Cable Street mural, Sunday 28th October 2018