What did the revolution do for Yiddish?

Barry Davis, a dear friend of many people in and beyond the Jewish Socialists' Group, died on 14th December 2017. He loved Yiddish language and culture, and shared his knowledge and talent generously. He wrote this wonderful article for the current issue of Jewish Socialist, in which he examines the new opportunities and the competing pressures surrounding Yiddish in the early years of the Soviet state. 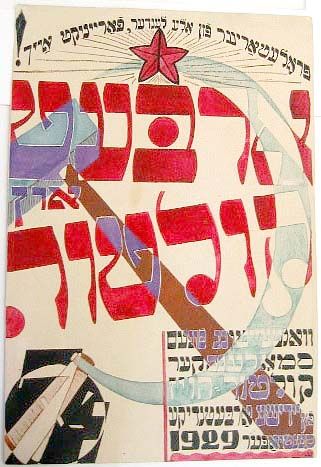 Following the February Revolution of 1917, all forms of Jewish culture and politics flourished, including socialist, Zionist, autonomist and the use of Hebrew and Yiddish languages. The Ukraine became a centre of the Yiddish cultural renaissance, around the Shtrom group in Kiev and the Kultur-Lige, an educational and cultural centre with its own publishing house. Following the October Revolution, inevitably, different priorities were applied. At the end of 1920 the Kultur-Lige, for example, was subsumed under the authority of the Ukrainian Evseksiia (Evreiskie Sektsii, Jewish Sections in the party and state institutions), which were established in 1918 to combat the influence in it of non-Communists, including Bundists and Jewish autonomists. The Evseksiia themselves were dissolved in 1930.

Most Yiddishists became enthusiasts for the revolution in early 1919, since any alternative was rapidly diminishing. The counter-revolutionary Whites were becoming more extreme and antisemitic, and there was a wave of pogroms, worse than those perpetrated in Tsarist times.

Yet, even if Yiddishists were in a minority within Jewish life, they could nevertheless claim to represent the Jewish masses, for following the Leninist “vanguard” position, they could express the “real” will and objective interests of the people. Hence, Yiddish could become the only legitimate expression of the new proletarian Jewish culture, and even Russian could be held in check, despite its prevalence amongst the Jewish intelligentsia. Yet, the shift of the Jewish population into Russia proper, and significantly to Moscow and Leningrad, involved a greater degree of Russification, though this would take time.

In 1926, 70.4% of the Jews of the Soviet Union declared Yiddish as their mother tongue. This fell to 39.7% in 1939. Gennady Estraikh quotes a poll in Ukraine in 1918 indicating that only 20% of Jewish parents wanted to send their children to Yiddish schools. David Shneer claims that, “most Soviet Jews, although they spoke Yiddish, preferred that their children spoke Russian”.

The official support offered to Yiddish by the new Soviet State, whether in the field of literature, film, theatre or education, was unmatched by that in any other centre of Yiddish speakers. In no other part of the Yiddish world, apart from Poland, did Yiddish culture sustain itself on a major scale in the interwar period. Esther Rosenthal-Shneiderman, a Yiddish teacher in the Warsaw Central Yiddish School Organisation (CYSHO) schools, who moved to the Soviet Union in 1927, described the uniqueness of the Yiddish project in the Soviet Union:

For us, Jewish teachers of Poland, used to constant evil decrees against the secular school system, it was new and joyful (and at times almost unbelievable) that there Yiddish culture not only experienced no persecution, but was actually an official government concern. We literally devoured the news about how the Soviet state itself took care of Jewish cultural institutions equally as it did of all others. No other state has ever undertaken such an enterprise since the Jews have been living in goles [exile/disapora].

Unlike in Poland, the Yiddishists’ project there did not have rivals in Zionism. In the Soviet Union, most political parties, other than the communists, were abolished in 1921, so the ruling Communist Party and the Evseksiia had a clear field. David Shneer portrays “an unprecedented burst of secular Jewish artistic and cultural expression.” The Yiddish activists “were not passive objects of Soviet policies towards Jews, but rather they actively participated in the creation of these policies.” He cites Jeffrey Veidlinger, who argued that the Yiddish theatre successfully navigated round the ideological demands of the state to bring their Jewish agenda to the stage. Granovsky’s Moscow State Yiddish Theatre, established in 1920, was taken under the wings of the Commissariat of the Enlightenment, receiving international plaudits, and even went on a European tour. For Shneer, the “tragic” interpretation of the Soviet Yiddish endeavour “puts the end of the story before the story itself”. The activists could not have known “what was to come”. It was “a history of cultural production, rather than cultural repression.”

In 1918, the Soviet state recognised Jews as a nationality or ethnic group (natsionalnost), and they came under the authority of Stalin’s Commissariat for Nationality Affairs. The various Sektsii were concerned with attacking religious education, Hebrew and Zionism. Yiddish was the obvious language of dissemination, fulfilling the needs of the Jewish masses, but not an end in itself, as had also originally been the case with the Bund. Semion Dimansteyn, head of the Evseksiia, proclaimed: “We are not, however, fanatics of the Yiddish language. There is no yidish hakoydesh [holy Yiddish].” Whatever the aspirations of the Soviet Yiddishists to use Yiddish to transform the Soviet Union’s Jewish population, in a Russia cut off from the great Yiddish urban centres in Vilna and Warsaw, the vernacular base of the language still resided in the Ukrainian shtetl. Yet, in the Soviet system, the shtetl was characterised as “a malignant tumour on the body of the young weak Soviet country”, which was, of course, engaged in the economic and social transformation of its Jews; between 1917-27, around a million Jews left the shtetls of Ukraine and Belorussia.

From 1924, under the policy of korenizatsiia (indigenisation) pupils were required to be educated in their mother tongues in Ukraine and Belorussia, which meant that in those republics there was a greater pressure to attend Yiddish schools. In practice, the rapidity of the move to Yiddish meant that there was a shortage of qualified Yiddish teachers. The idea was to recruit the Jews to speak Yiddish as a further weapon in their republics to combat Russian, which was seen as a symbol of the oppressive nationalism of the Tsarist Empire. The issue was less urgent in Ukraine than in Belorussia, which had a weaker sense of national identity and culture.

Hence, the most flourishing Yiddish language culture in the young Soviet state took place in the Belorussian Soviet Republic and particularly in the capital, Minsk, with its 50,000 Jews – just over 40% of its total population. In 1922, together with Belorussian, Russian and Polish, Yiddish was one of the four official languages. Belorussia even had a central Yiddish court. In 1925, Yiddish was recognised as the official language in four regions of the Ukraine. In Belorussia in 1931, the 36,500 pupils in Yiddish primary schools comprised over 50% of its Jewish children. In Ukraine, where the Yiddish speaking population was more than seven times higher, the respective figure was 94,800. In the Russian Soviet Republic, the figures were much lower: 11,000 in 1931. The area had mostly been outside the Yiddish-speaking Pale of Settlement in the Russian Empire.

There was pressure from local education authorities to send Yiddish-speaking pupils to the less-crowded Yiddish schools. Yet, many parents preferred to send their children to the non-Yiddish schools as the anti-religious propaganda was against Russian Orthodoxy rather than the Jewish religion. Furthermore, there were no Yiddish secondary schools, and in the Yiddish schools, the level of Russian as a second or third taught language was admitted even by the Evseksiia as being very low. Furthermore, compelling Jewish pupils to attend Yiddish schools gave an opportunity for antisemitic elements not to admit too many Jewish children into the general schools. When the korenizatsiia policy was changed in the mid-1930s, the numbers attending Yiddish primary schools sharply declined. The schools in Belorussia were dissolved in 1938, though not those in Ukraine.

In the Ukraine 22.7% of Jews were educated in Russian. Yet, in 1923, 47.4% of all students in institutions of higher learning in the Ukraine were Jews (as compared with 10.7% in 1913), though the Ukrainian Jewish population was 5.4% of the total population. One must suppose that the great majority of these courses were in Russian.

Whilst Yiddish newspapers, journals and books were promoted, Hebrew was not considered the language of the Jewish folk masses but of the Jewish bourgeoisie, of Jewish clericalism and of Zionism. Most Hebrew schools were closed in June 1919, though some vocational schools were allowed to remain in existence until 1921. Private Hebrew classes were permitted until 1922. The Hebrew press was nationalised in 1919 and used to publish materials in Yiddish. The Hebrew Habimah theatre, however, which Stalin himself had backed as Commissar for Nationalities, remained in the Soviet Union until 26th January 1926, and Hebrew could still be studied at the university, and by adults, if privately funded. A symbolic change occurred in 1920, when the Evsektsiia introduced the phonetic spelling of all Hebrew words in Yiddish. This cut the organic link of Yiddish to Hebrew.

Yiddish writers saw their opportunity to disseminate their works and to earn a reasonable living. They were not under commercial pressures but they did increasingly come under political ones. They perhaps embraced the new order more enthusiastically in public than they felt privately. Earlier on, they had suppressed their scepticism, and even came to believe in the validity of their commitment, until it was too late for them to reverse their course. At any rate, in the early stages of the revolution, no one was able to predict the Stalinist outcome and the eventual tragedy of Yiddish culture in the Soviet Union.